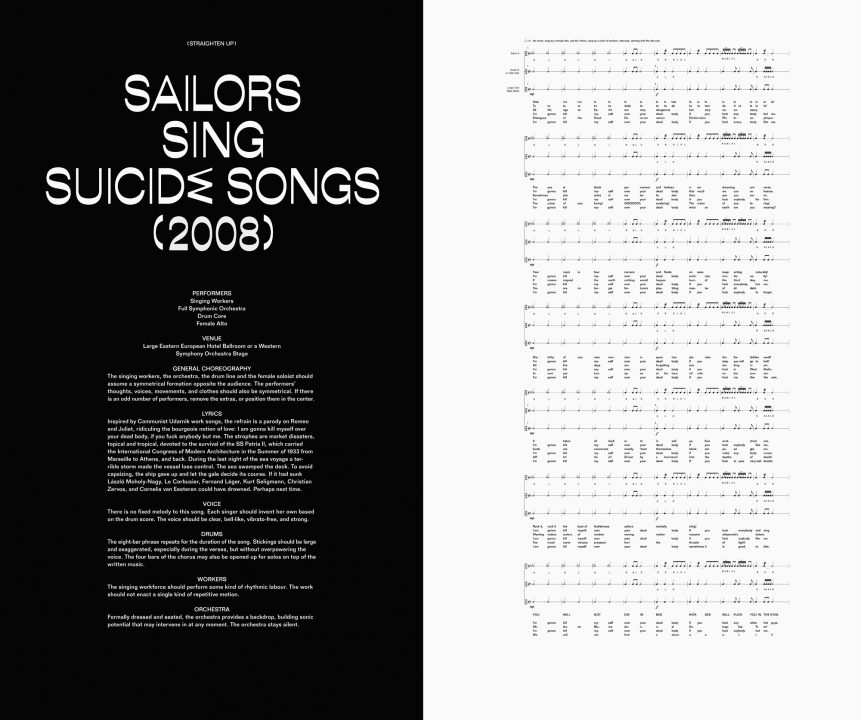 In 2009, the Dark Departments assembled the Gesture Guild, an occult bureau for the recovery and acquisition of voluntary gestures. Afflicted with recession-based involuntary movement the public joined programs celebrating the moment when wages equalize in the First and Third Worlds.

The Gesture Guild was inaugurated by Sailors Sing Suicide Songs, a shipwreck anthem dedicated to the SS Patria II, carrying the international Congress of Modern Architecture from Marseille to Athens and back in the summer of 1933. During the last night of the sea voyage a terrible storm made the vessel lose control. The sea swamped the deck. To avoid capsizing, the ship gave up and let the gale decide its course. If it had sunk Laszlo Moholy-Nagy, Le Corbusier, Fernand Leger, Kurt Seligmann, Christian Zervos, and Cornelis van Eesteren could have drowned. Perhaps next time.

The Guild published Decapitation Index, a Swiss Weltformat-size weekly pamphlet, re-telling the deaths of white dudes of Minimalism and Conceptual art in the guise of ongoing Serbian narco-mafia assassinations and retaliations. The texts create a tabloid killing spree/gang war, unfolding before and shortly after the artists’ arrival in Switzerland for the opening of the first major international survey of Conceptual art, “Live In Your Head: When Attitudes Become Form,” curated by Harald Szeemann for Kunsthalle Bern in 1969.